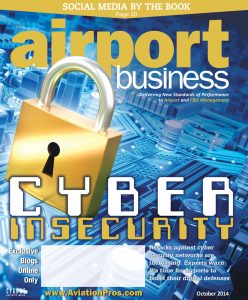 As editor of Airport Business magazine, Ronnie Wendt completely overhauled the magazine’s look and editorial content. Besides turning the news sections into an infographic format and adding new features and columns, while at the helm, Wendt’s writing earned the magazine international recognition. The magazine received an award for best feature in the 2014 Tabbie Awards, an international B2B magazine editorial and design awards competition. This was not Wendt’s first Tabbie award (she has won several including best single issue for her coverage of the Virginia Tech shooting in Law Enforcement Technology magazine), but it marked a first for her in the aviation sphere.

This excerpt is taken from the Tabbie Award winning article in Airport Business.

“Here’s the scary part about these incidents: They are attacking and targeting airports—and nobody really knows why,” says Andre Allen, information and cyber security manager at GCR Inc., an international software and technology firm in the airport space.

Not only that but, according to Mark Gazit, CEO of Theta Ray, a national firm offering cyber security solutions, the average time to discover a threat is approximately 240 days. But, he adds, it can take a month or more for an organization to recover.

Even more concerning are the words of Dom Nessi, deputy director/chief information officer at Los Angeles World Airports (LAWA): “I think airports have a long way to go, both in the United States and internationally, to meet the challenges of today’s cyber threat. That’s not to say that individual airports haven’t excelled in terms of cyber security, but many airports still have work to do.”

Click here to read the award-winning article and issue it appeared in.