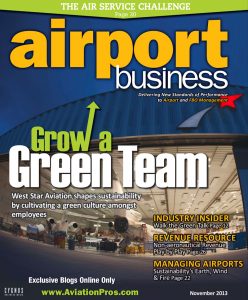 Sustainability can be represented with a three-legged stool having a leg for environmental, social and financial responsibility. Ronnie Wendt has spent many years writing about how businesses can move down the path toward greater sustainability. The excerpts below are taken from an entire issue Wendt prepared on sustainability for Airport Business. Each article covers the topic in a uniquely different way. One is a case study of a company’s efforts to improve their sustainability; another looks at three ways airports can minimize their environmental impact; and a third uses a profile of an industry leader’s work to impact environmental change.

Over the years the company, which embarked on its green journey in 2007, has successfully cultivated a culture of sustainability that resonates with every employee and permeates every facet of the business.

Its core commitment to sustainability has helped the company save green as it has gone green. In fact, where West Star Aviation once spent approximately $50,000 per quarter to ship 28 different waste streams offsite, its average quarterly spend for the same service today is around $16,000 because recycling has cut its waste streams to 17.

And that’s just the beginning.

(From a case study on West Star Aviation’s sustainability program.)

Airports like Seattle-Tacoma International Airport, Chicago O’Hare International Airport, and Indianapolis International Airport are leaving no stone unturned in their quest for the earth, wind and fire of environmental sustainability. In the case of these airports, they’ve already found it. O’Hare uncovered the earth in an environmentally saving runway project; Sea-Tac faced the wind with its preconditioned air system; and Indianapolis stoked the fire with its solar farm. Of the three examples, consider this: Sea-Tac projects its airlines will use 5 million gallons less jet fuel a year because of their access to its new preconditioned air system; O’Hare kept 6 million cubic yards of dirt and concrete out of the landfill; and the Indianapolis solar energy project prevents 11,000 tons of carbon dioxide from being released into the atmosphere annually.

“There are many environmental projects out there that are smart both environmentally and economically,” says Elizabeth Leavitt, Sea-Tac environmental director. “If you focus on the low-hanging fruit in the beginning, people will start to see that sustainability is not just about being green in terms of environment but also in terms of money.”

(Taken from an article providing concrete examples of how airports can minimize their environmental footprint.)