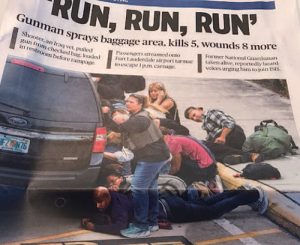 The statistics from the National Center for Victims of Crime are grim; more than 57 percent of all recorded mass shootings occurred within the past decade. When you look at the fatalities and casualties from these tragic events, it gets even worse. The worst year on record was 2017, where 117 people lost their lives and 587 people were injured in 11 mass shootings. With statistics like this in hand, it’s clear that public spaces, including airports, must ready themselves for the unthinkable.

Fort Lauderdale-Hollywood International Airport’s Director Mark Gale and other airport executives have chosen to be very public about the airport’s Jan. 6, 2017, massacre that kicked off the worst year in mass shooting history. Their reasons are simple: To help others prepare and respond.

This is an example of a sensitive topic, handled with tact and sensitivity and covered thoroughly, so that others can learn from it. Ronnie Wendt has covered mass shootings from the Columbine shooting in 1999 to the Las Vegas strip tragedy in 2017.  She has made it her mission to showcase how we can understand, prevent, prepare and respond to these events.

“Early last year, Fort Lauderdale-Hollywood International Airport (FLL) in Broward County, Florida, experienced the deadliest airport shooting in U.S. history when a passenger killed five people and sent six others to the hospital with injuries. More than 50 others were hospitalized for chest pains, low blood sugar, broken bones, etc. incurred while fleeing the scene and during a subsequent stampede triggered by false reports of another shooting.

Airport Director Mark Gale and other FLL executives have been notably candid sharing their reflections about the horrific tragedy for the good of the overall industry. “When you think of the tens of millions of people who traverse through airports every day, there is no foolproof way to prevent the actions of a single individual,” Gale says solemnly. “However, there are lessons in this incident that can help every airport—from a small general aviation facility to a large mega-hub—be better prepared.”

“Just because we are better prepared, doesn’t mean that everything’s going to be fine,” Gale reflects. “If the same kind of event were to happen again tomorrow, next week, next month or next year, we could wind up with similar outcomes. But we believe through regular meetings with law enforcement and fire/rescue, and by drilling together, at least a piece of how we respond might be much different and much better.