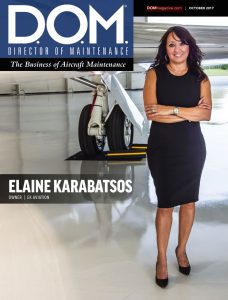 A profile is a feature story that focuses on a person and what’s important or interesting about him or her. It is a great way to tell a story about your executives and employees or people of interest in your industry in an interesting and compelling way. Plus, as a bonus, many editors are interested in profiles for their magazine and web pages. Profiles are a great way to promote your company story!

This profile shares the story of a woman making it in a man’s world. Elaine Karabatsos broke barriers when she became an aviation mechanic. She continues to raise the glass ceiling for women in aviation and recently chartered her own course as a business aviation consultant. The following are excerpts from her story as it appeared in DOM Magazine.

When Elaine Karabatsos describes her ascent to an aviation career, she prefaces it with a story about her family and tradition. She likens her own Greek family to the one portrayed in the movie, “My Big Fat Greek Wedding,” and her path toward a non-traditional career as not unlike the main character’s road to marriage.

Though the movie provides an extreme example of the way things are in a Greek family, Karabatsos admits her very traditional Greek parents wanted her to choose a conventional female-oriented career, such as nurse or teacher, over that of aircraft maintenance technician.

Karabatsos laughs as she points out the irony that it was her father’s own love of antique cars that set her on this journey. She explains he was always working in the garage on his antique cars, and she was a tomboy. “My sister was always in the house doing things with my mom, and I was always outside in the garage with my dad,” she says. “It was my father who introduced me to tools and engines, and who taught me to fix a carburetor. It was here that I picked up the mechanical vocation.”

A Forbes article titled, “It isn’t About Being a Woman in a Man’s World,” opines that “it is necessary to identify that you are the right person for the job, regardless of gender.” For Karabatsos this has certainly been true. While it takes a certain type of person to be an A&P, she says, it doesn’t matter if that person is a man or a woman. However, she points out she has had to prove herself on the job to earn her counterpart’s respect.

She is quick to add, “Though I’ve had a lot of hurdles and had to prove myself to other co-workers, we all have to prove ourselves. I just had to try a little harder.”

“A&P was a very nontraditional female role when I graduated, but there were people who believed in me and helped me along the way,” she says.