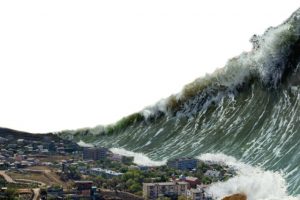 Disruptions in the supply chain are a fact of life. But when companies are prepared for risk, they can mitigate the unexpected quickly and get back to business as usual. This article gets businesses considering risk to their supply chains through a dramatic example. Readers learn how the 2011 tsunami crippled General Motors’ supply chain for months and the changes the automaker made to ensure it didn’t happen again. This article offers a concrete example of a case study being used to discuss a problem in the industry and one company’s solution to it.

Five years ago, when a magnitude 9.0 earthquake struck off Japan’s northeastern shore, generating gigantic tsunami waves that crashed into miles of shoreline and destroyed coastal towns and villages in its wake, there were global implications for manufacturers—especially for an automaker, General Motors (GM).

The Detroit, Michigan-based manufacturer of Buick, Cadillac, GMC and Chevrolet vehicles found out the hard way that their business continuity plans were too tactical. Todd Scott, executive director of Global Supply Chain at GM, explains the company has vehicle architectures that are designed under specific platforms then produced globally, from Asia to South America and Europe to North America.

“As a result of this global architecture, we have shared supply from the Tier One level down,” he says. “We didn’t understand our sub-tiered supply base well in 2011. We didn’t know the locations of all of our suppliers, and we didn’t know which suppliers supplied our Tier Ones.”

The regional supply chain heads for the company’s different divisions across the globe didn’t know, or ever talk to, each other. “We really didn’t know each other well and that added an extra layer of complexity,” he says.

It’s no surprise then that GM was still actively locating suppliers within the affected area six weeks after the tsunami, which created tens of billions of dollars in damage and took 16,000 people’s lives.

Fast forward to April 2016, when Japan was hit with a 7.0 magnitude earthquake. The changes GM made since 2011 helped the manufacturer recover quickly from the quake, which displaced 44,000 people and caused billions of dollars in damage. In fact, it took GM just six hours to locate and contact all its affected tiered suppliers. So, even though 70 of the company’s suppliers suffered negative impacts in the earthquake, the company responded quickly and still reported record profits in the second quarter.

“We are a much more globally connected organization today,” Scott says. “When the 2011 tsunami hit, we had to dispatch one of our most senior executive vice presidents from North America to discuss tactical issues, such as ‘Can we borrow those parts from you? We’ll loan you these parts in return, and we promise to pay you back. Here is our arrangement in writing.’ With the quake that hit in April, we had that all worked out to a working level within just a matter of days.”