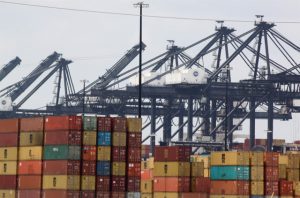 Transporting cargo involves more than planes, trains and trucks. It involves ships too. The long-awaited expansion of the Panama Canal took nearly a decade and cost $4.4 billion. It’s made it possible for post-Panamax ships, carrying up to 14,000 TEUs to traverse the canal. It’s also created challenges for the ports these larger ships are going to. This article examines how the nation’s ports readied themselves for the change.

The question on everyone’s mind is: What kind of cargo share increase might the East Coast and Gulf Coast ports see now that the long-awaited Panama Canal locks have opened?

If studies by Parsons Brinckerhoff and A.T. Kearney are to be believed, the opening of the new Panama Canal locks will boost both East Coast and Gulf Coast cargo traffic. While these studies forecast that 50 percent of the traffic moving through the enhanced canal will be destined for East Coast ports, Gulf Coast ports stand to win an increased share of cargo as well, with forecasts predicting a 12 to 15 percent uptick in cargo, equal to 5 million TEUs over the next 10-plus years.

The increases in the Gulf were anticipated and planned for, especially among the ports of Houston, Mobile and New Orleans; three major players that stand to be impacted the most by the Panama Canal improvements. Studies predict as container shipping lines adjust their schedules and services to include post-Panamax ships, Gulf ports’ cargo share will increase by 7 percent in 2017, then level off to an annual growth of 3-4 percent a year throughout 2028.

The Panama Canal’s new locks measure 1,200 feet by 160 feet, making it possible for them to accommodate ships carrying approximately 13,000 TEUs and drawing up to 50 feet of water. In contrast, current Panamax vessels have a 4,500 to 5,000 TEU capacity and a maximum draft of 39.5 feet.

Considered one of the world’s busiest ports, studies at the Port of Houston project up to a 15 percent boost in activity by 2020, much of which will be driven by the expanded Panama Canal. The port, which handled 68 percent of the total U.S. Gulf Coast container traffic in 2015, readied itself for the long-awaited opening of the new Panama Canal through a billion-dollar plan to upgrade its infrastructure to attract post-Panamax ships. As part of this effort, this busy Texas port purchased nine new cranes for the terminal and dredged its channels to accommodate the larger vessels.