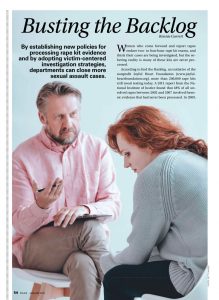 The rape kit backlog continues to make headlines. Though police departments are making positive strides, experts still refer to it as a “moving target” as the number of untested kits fluctuates up and down nationwide. This type of article is what Ronnie Wendt is best known for. She is adept at taking a hard look at a sensitive subject and handling it with compassion and insight into the victims and the law enforcers trying to investigate these crimes. She digs in deep to reveal the root of the problem and proposed solutions, and identifies top-level sources to provide insight.

According to End the Backlog, an initiative of the nonprofit Joyful Heart Foundation, more than 200,000 rape kits still await testing. A 2011 report from the National Institute of Justice found that 18 percent of all unsolved rapes between 2002 and 2007 involved unprocessed forensic evidence. In 2009, 11,000 forgotten rape kits were discovered in a Detroit police warehouse, meaning 11,000 victims endured a rape exam only to have the evidence discarded.

Many police departments lack clear written policies outlining the handling and testing of rape kit evidence. In addition, many agencies also lack the manpower and financial resources to appropriately investigate sexual assault cases. When sex crimes units are under-resourced and inadequately staffed, it leads officers to dismiss weaker cases. In many places, the decision of whether to send in a rape kit comes down to one person who might bring into that decision a host of biases and prejudices, and preconceived notions about how a rape survivor should act.