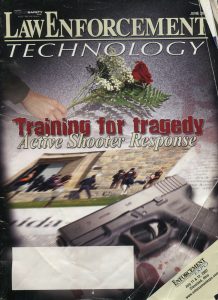 Ronnie Wendt had gone home the night before, ready to send Law Enforcement Technology to the printer. The following day she found herself rallying the troops to recreate the finished magazine, with coverage from what was then the worst mass shooting in the country’s history. The publication received a Tabbie award for best single issue and landed an APEX Grand Award for its coverage of the Virginia Tech campus shooting. Wendt’s article, “Marching to the Sound of Gunshots,” also received an APEX Award of Excellence in the feature category. Below are excerpts from Law Enforcement Technology’s coverage of this tragedy.

Imagine sitting in a classroom, daydreaming and staring at the sunny skies just outside an open window, as your instructor drones on about elementary German. You are abruptly dragged from your reverie by loud popping noises in the hallway outside. Thinking it’s the din of construction as carpenters begin their day, you turn your attention back to the lecture. Then a man dressed in a black leather jacket, dark-colored jeans and a baseball cap storms into the room and you find yourself in the crosshairs of a .22-caliber pistol.

While this might sound like it’s ripped straight from a Hollywood movie script, it is exactly the situation some Virginia Tech students encountered on April 16 when a 23-year-old gunman murdered 32 people before killing himself.

These types of cases have become so commonplace that law enforcement professionals coined the phrase “active shooter.” This term is used to describe an armed individual who has used deadly force on others and continues to do so while having unrestricted access to additional victims. The list of cities struck by the active shooter phenomenon is long and includes places like Littleton and Bailey, Colorado; Jonesboro, Arkansas; Red Lake, Minnesota; San Diego, California; and Barts Township, Pennsylvania. Reviewing the list of names, it quickly becomes clear that be it a pastoral village or sprawling metropolis, no community is immune to an active shooter massacre.

It is nearly impossible for law enforcement to predict if, and when, another shooting incident will happen. When a tactical situation with an active shooter is underway, it is even more daunting and increasingly difficult to identify the type of person behind the gun who endangers the lives of others. Comprehending the psychology or inner workings of the gunman’s mind and the behavioral precursors to a shooting may be the best defense in preventing another senseless act of violence.

“It is very difficult to try to anticipate these types of shootings, given the availability of guns, ammunition and automatic firearms,” says Dr. Scott Thornsley, associate professor of criminal justice at Mansfield University in Mansfield, Pennsylvania.